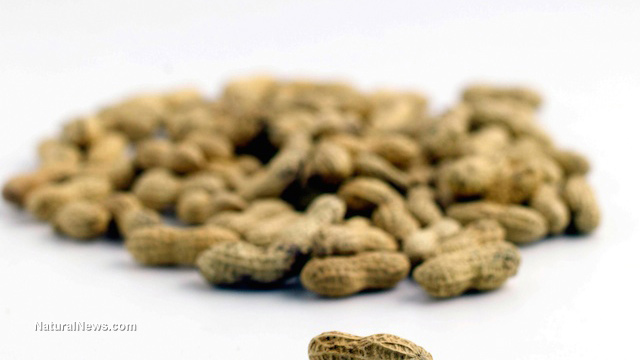 (NaturalNews) Why are so many people allergic to peanuts? How weird, right? Between six and ten people out of every thousand are allergic to peanuts! That's up from two out of every thousand just 15 years ago. Some people can't even be in a room where a package of peanuts or peanut butter is opened, and some can't ever eat anything that was packaged in a room where peanuts were packaged.

This hypersensitive reaction can cause a drop in blood pressure and send people into anaphylactic shock and/or cardiac arrest. It's the most common cause of fatal food-related anaphylaxis. Since the most obvious and dangerous route for an allergic individual is unintentional ingestion, let's use our common sense here and figure out that, if the vaccine industry uses peanut oil for manufacturing shots for various diseases and flus, then the ingestion of peanut oil that bypasses the digestive and breathing filters and is injected directly into muscle tissue would cause the most violent and detrimental immune reactions possible.

Now, let's consider WHY, WHEN and HOW OFTEN babies are injected with toxic adjuvants and egg embryo, not to mention peanut oil: NaturalNews.com.

Was that CDC vaccine schedule 30 inoculations before age six? Does the CDC in the USA warn everyone about peanut allergies when they get jabbed with that -- plus mercury (thimerosal), formaldehyde and aluminum -- over and over? Do we have an answer for this, parents? It's time to start demanding the truth. Maybe you could ask the CDC's own whistleblower about autism from the MMR (measles, mumps and rubella) vaccine!

The Peanut Antigen is STILL PRESENT in Vaccines!

Peanut oil has been used in vaccines since the 1960s. You see, because peanut oil does not SHOW UP in the final vaccine product, the manufacturers are allowed to leave it off the package inserts. That does NOT mean that the peanut antigen is not found in the product. Peanut oil is just one "growth medium" that vaccine manufacturers use to make vaccines, like egg embryo (protein) and casein (milk). This is what they use to make MMR and influenza vaccines. It also says on the flu shot insert not to get more than one jab in a lifetime! Do you happen to know what peanuts and vaccines have in common? Thousands of people are allergic to both.

In 2006, the Public Readiness and Emergency Preparedness Act (PREP) exonerated vaccine makers of any damages from vaccinations. They have their own special court now. Wonder why? They know WHY there are so many peanut allergies, and they also know that mercury is poison, especially when injected.

One precedent court case was brought to light on the peanut oil/vaccine phenomenon in 2010 when parents were accused of shaken baby syndrome, but an MD presented corroborating medical information regarding anaphylactic reaction that the six-month old baby boy experienced resulting in tremendous swelling and pressure in the brain. The Prevnar vaccine also contains soy protein [PDF], and there has been a tremendous rise in those allergies in the population. Again, the math is easy to do on all of this.

All of these antigens in vaccines are perceived by the immune system as foreign proteins, and the body ends up attacking itself, leading to autoimmune disorders.

Food allergies are thought to affect 8 percent of U.S. kids, with the most common culprits being cow's milk, wheat, egg, soy and, of course, peanuts. Over one million children living in America today suffer from peanut allergy, of which a large percentage have so severe of symptoms they must carry self-injectable epinephrine at all times. Conversely, hardly a living soul had peanut allergy prior to the year 1900!

For so many, the peanut allergy "phenomenon" is solved. It's your body's current hyper-immune response from being injected with peanut oil in vaccines for years. End the vaccination violence! There is NATURAL IMMUNITY available in Nature, hence the name. Do your own research. Here's a great place to start!

Sources for this article include:

Follow real-time breaking news headlines on
Peanut allergy at FETCH.news
The world of independent media, all in one place.
Receive Our Free Email Newsletter


Feeding peanuts to infants can reduce allergy risk by 81 percent


Evidence-based vaccinations: A scientific look at the missing science behind flu season vaccines

Take Action: Support Natural News by linking to this article from your website

Permalink to this article:

This site is part of the Natural News Network © 2021 All Rights Reserved. Privacy | Terms All content posted on this site is commentary or opinion and is protected under Free Speech. Truth Publishing International, LTD. is not responsible for content written by contributing authors. The information on this site is provided for educational and entertainment purposes only. It is not intended as a substitute for professional advice of any kind. Truth Publishing assumes no responsibility for the use or misuse of this material. Your use of this website indicates your agreement to these terms and those published here. All trademarks, registered trademarks and servicemarks mentioned on this site are the property of their respective owners.

100% Real, Uncensored Health News
Find out everything you need to know about clean and healthy living when you sign up for our free email newsletter. Receive health tips, natural remedies, exclusive in-depth reports on superfoods, toxins, and more – what the mainstream media doesn't want you to know!
We respect your privacy. You may unsubscribe at any time.

"Big Tech and mainstream media are constantly trying to silence the independent voices that dare to bring you the truth about toxic food ingredients, dangerous medications and the failed, fraudulent science of the profit-driven medical establishment.

Email is one of the best ways to make sure you stay informed, without the censorship of the tech giants (Google, Apple, Facebook, Twitter, YouTube, etc.). Stay informed and you'll even likely learn information that may help save your own life."